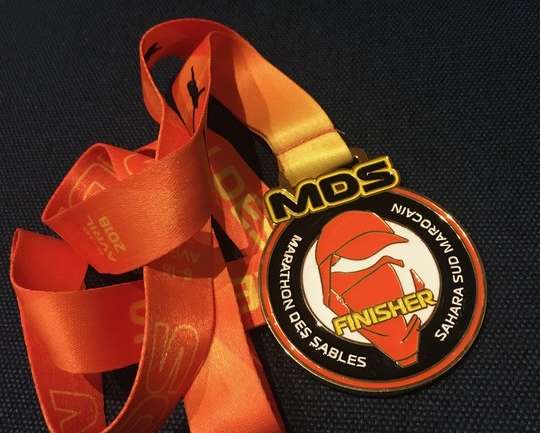 Fitting Ultra-Marathon Training in with Work and Family Time

I’m not a runner. Or at least, before I ran my first ultra-marathon last year, I didn’t think I was.

I used to run maybe a total of 10 to 20km a year, perhaps an occasional 5km more some years.

And then one day, I heard at the gym that there was going to be a talk about Marcus Smith & Tom Otton, two guys who had just completed this epic 250km run across the Sahara Desert called the Marathon des Sables.

These two had accomplished this amazing feat while carrying all their provisions on their back. I was intrigued. In fact, I was in total in awe of all the mental strength and grit it must have taken them to do it. It was amazing but not something I saw myself doing in my wildest dreams.

A whole year later, I heard that my friend Johnny and another guy Omar Derbas had just run the Marathon des Sables, too.

Johnny and Omar told me how grueling yet amazing the whole experience had been – essentially running six back-to-back marathons with the longest run being an 86 km stage, with a backpack full of everything you need to survive in the desert.

Six days of running up and down sand dunes, climbing rocks, coming to terms with terrible sanitation, no showers and freeze-dried food for meals. Awe-inspiring, yes, but the torture-run still didn’t seem like something I wanted to do.

One part of me just didn’t understand why anyone would do it – why run more than the recreational 5k or a more challenging 10k? Wasn’t the impact and the stress on your joints bad for you?

I had an endless bicker about it with my wife when I got home, and she finally said, “Well, it’s okay, you don’t have to do it, you’re not doing it, so forget about it.” I agreed and retracted into my office for a few quick email checks and such.

Five minutes later, I walk back into the living room to announce that I had signed up for the next Marathon des Sables, which was in six months’ time. I can still hear that resounding ‘What?!’ that followed.

Yep, I’d done it. Signed up. No turning back.

I was going to go from a non-runner to an ultra-marathoner. And I had six months to do it.

Before I get into my training schedule and how I fit it in, let me tell you why I did it. I did it because I really wanted to see what the fuss was all about. I was attracted to the extremity of the challenge. I wanted to put myself through something that big, something that extraordinary.

And somewhere amidst all the bickering and counterarguments I had, I was inspired by the amazing feat Johnny and the rest of the boys had achieved. Most of all though, I’m a story seeker, and I wanted to see where this would go.

Now, to the training part.

I knew that an hour-long or even a two-hours-long run in the morning was not going to cut it. I needed to be simulating the ultra-marathon, which meant running four to five hours when the day was at its hottest.

That meant a four to five-hour run starting at 11:30 pm and ending around 4 pm – smack in the middle of the business day. I needed to fit this training in every alternate day.

Over the weekends, I would train in the desert to really get in the zone. I used to do eight-hour runs back to back at the weekend. I would run eight hours on Thursday, spend the night in the desert, camping on my own.

And then another eight hours of running on Friday before I pitch up my tent for the night. Then maybe another three or four hours on Saturday morning before I headed back.

Was it challenging? Yes, absolutely. I was clocking in fewer hours at work, and I really needed to make them count. I was extremely careful about who I met and what I did at that time.

Did business take a hit? Not at all – 2018 was, in fact, one of my best years in terms of business growth and revenue.

Did family time take a hit? Well, I lost the few weekends that I put into training. Apart from that though, I had my evenings entirely cut out to spend time with my wife and kids, and I made it a point never to go back to work after 5 pm.

Would I do it again? Without a doubt! In fact, I’m counting down the days to Marathon des Sables 2019, and I’m in training mode again.

This year, I’ve got more reason to do it. I’m running for a cause.

How Comfort Zones Change Over Time